Wyatt plays rock’n’roll guitar the way I aspire to. I hear him do better versions of some things I do, and tons more. It was like a crystal ball with an optimistic vision of where my playing can get to.

I got to take in the show right up front, off the corner of the stage held down by Bazz, and his bass playing blew all minds in the vicinity. He’s mastered this type of electric bass playing that doesn’t seem like it should work; no one should be able to pull and thump like that without nailing the pickups and sounding awful. I’ve never seen someone play so hard but so cleanly. Really wild. Very unique. I couldn’t figure it out – was he somehow muting, maybe with the edge of his picking hand? However he did it, he’s got it down.

Mr. Phil Alvin was led through the crowd shortly after the band took stage. I didn’t recognize him at first, with his beard, but sure enough. He moved slowly and stiffly, and was mostly stationary on stage, but no struggle or strain came through in his outstanding singing. It was like he channeled every bit of energy into his wailing, which is what really mattered most.

The songs and performances were so good! The sold-out room was wall-to-wall with ear-to-ear grins. The Blasters, playing GB for the first time ever, and just ruling! It was special.

Muddy Udders opened and we had a really good time; ~35-minute sets were never really our forte, but this was one of our better ones. We’re doing an hour and a half at Jam For Jam this Friday that’ll be a lot less scripted, more time for improvising.

The Delta Bombers said we sounded like Primus, which they meant as a compliment, but…. I think the only comparison I’ve ever been happy about was when The Woggles’ guitarist – Flesh Hammer – told me I sang like Mitch Ryder. Cool! But for all I know he says that to all the younger singers who open for them, which would at worst encourage the uninitiated to get hip to the Detroit Wheels.

The Delta Bombers were very good, as are most of their roster mates at Wild Records. I’ve lost touch on what In The Red puts out these days, but Wild’s consistency reminds me of ITR’s. (Thus concludes my entire knowledge of current record labels.)

I hadn’t played a basement show in GB since one with Harvey Brown a couple years ago, and it felt great. All the smoke kinda got to me, but it was better than everyone standing outside and getting the show shut down.

It worked out really well. Brad from The Onions ran sound, and there was a keg and a gourmet taco bar for about 40 people.

Lucifer’s Crank played first, mostly made up of members of the defunct Dixxx, who I’d somehow never seen. Fun rock’n’roll with vocals that are satisfyingly screeched instead of growled. The singer bared his back a few songs in, displaying an impressive tattoo of a lovely lady (done by host Joseph Lambert), and singing about how unfortunately popular he’d be in prison sporting ink like that. Funny premise.

Foamers? played second, and it went well! I had the idea earlier that day for us to cover The Ramones’ “I Don’t Wanna Go Down to the Basement” as preemptive means of mocking anyone who hung out upstairs instead of watching us, but that didn’t really happen! We played it anyway, then partied.

Rev. Norb & The Onions were the grand finale, and of course they ruled. Not like, oh, they’re predictably solid. But because every time I see them they put on another great show. Norb, in full-on next-door neighbor mode, performed in a (Star Trek) robe, sleep mask, and aqua socks. 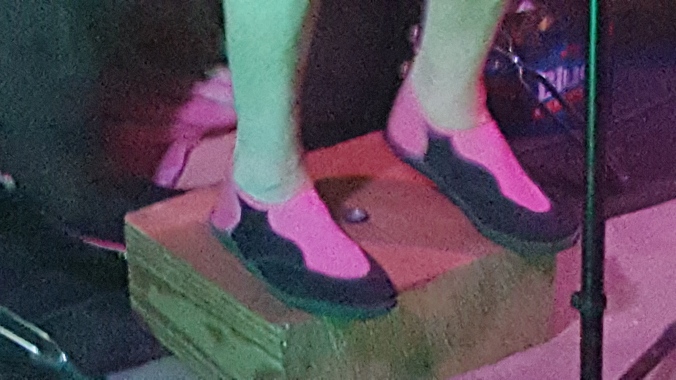 Brad wore his own band’s t-shirt – I’d do that if I were in that band, too. I like these songs so much by now, I realized I’ve become more of a fan of this group than I was of Boris the Sprinkler. Granted I’ve now seen Norb/Onions a lot more than I’ve seen Boris, who, to be sure, were outstanding. But it’s a combination of this group’s songs, and the fact that Norb now tosses solos to Brad, who’s just always been the area’s best rock’n’roll guitar player.

Like I said, we partied after the Foamers?’ set. I mean, it was a party – we couldn’t be impolite.

J-Council had found out on Friday that we needed to do a photo shoot the next day – someone needed a promo shot for something by Monday. After group-text brainstorming that no one could take seriously, we just knew we’d get together Saturday afternoon. But I apparently missed the update that we’d be shooting earlier than planned, and my phone and I, both drained, shut down after the house party.

I didn’t turn my phone on at all the next morning; my wife came to the party, too, and I wanted to let her sleep in, so I was just doing the dad thing, tending to the tykes, making meals, and the doorbell rings – it’s my bandmate Alex, snazzily dressed, telling me we’re supposed to be at the half-hour-away photo shoot in twenty minutes. I’m wearing pajama pants and a layer of last night’s sweat n’ smoke.

Switched gears, woke up wife, drove, photo shot. We got to work with Justus Poehls and Oliver Anderson, two talented guys who are also great people. I’ve never been in a band that liked getting its picture taken, but it’s never a bad time hanging with the J-Council dudes – something we’ll really test when we drive to Brooklyn and back next month! Side note: Justus was great to work with, and his studio is right next to the house where I practiced during my cup of coffee as drummer for the Orange Iguanas.

Another side note: Guitar Center is awful. Forget that place. I stopped there after the shoot, hoping to buy a bass head they’d had, but someone swooped in before me. Not the point; even if they’d still it had it, it’s just the worst vibe there. Dick’s Music Shop (where I took some banjo lessons, bought my Telecaster and numerous necessities) just announced they’re closing, and if we lose independent stores in favor of these soulless chains, that’s another nail in the culture coffin. The best thing that came from it was Travis and me picturing the Guitar Center hiring process, deciding it’s based on a polygraph that measures applicants’ excitement while Dream Theater recordings are administered. “Does it get you going? The job is yours!”

Seriously, I felt more comfortable – in my yellow leisure suit from the photo shoot and all – buying a Mother’s Day present at Menard’s than I did at that Guitar Center. That’s pretty backward.

Another side note: Cozzy Corner rules, but you hopefully already know that!

Back to GB, do some more dad-ing, and back to Lyric Room.

I admit I was dragging by this point; weak as it may sound, I hadn’t played three nights in a row in a while. I got there a couple songs into TLSoB’s set. Crowd was more quality over quantity – modest but attentive and appreciative.

I hadn’t seen That Last Sip of Beer, or their other band Zippnutts. Turns out they’re from Wausau, which got me excited – I’d just been talking with Mark from Top Spins, who just moved to Wausau, about his goals of better connecting Wausau to the local music scenes. Even though I’ve never played there, it made all this sense to me, and it was cool to meet more people from there. Sounds like the Polack Inn and the Cop Shoppe are the places to hang.

Travis and I threw together a setlist and got at it. We’d saved our less-fast stuff for this show, to better set up FTRK’s sound. Supposedly our song “Gotta Run” was on the radio in GB earlier that morning, and we were set to play it anyway; anyone who came specifically to see it live got their wish! Since TLSoB played a song about wanting to live in a high rise, and since we’d just learned it, we figured our Ramones’ cover from the night before would fit. Overall, while Travis was on as always, I played better the night before. Playing in The Foamers? is pretty tough to do but I like the challenge, and the style really works when I’m not messing up a ton – there’s just nowhere to hide any mistakes in a two-piece.

Harvey Brown played their first show in forever, and it was one of their best. It’s too bad more people weren’t there for it; blame either music fatigue or just lack of word-spreading, I don’t know, but it was a privilege to be there. My favorite shows of theirs are the ones where they really play together and off each other, and perhaps because they haven’t performed in a while, the members of HB were looking to each other a lot, and the chemistry was transcendent in that unique way of theirs.

I won’t say I want the four of them to focus on playing together rather than their other projects, because they’ve earned my encouragement no matter what they do. But of all the great sets I saw this weekend, Harvey Brown’s may have wound up my favorite. I’m not trying to give anyone a complex – I want them to do whatever they want (I appreciate that they want to do anything at all), and Short Timers and Alley Cat/Purrfection are working on some cool, different stuff. But HB really ruled Saturday night and I certainly wouldn’t mind seeing them play more often.

Between the heights achieved by Harvey Brown, and the fact that they’d had Mollie Gene sitting in with them last time but not this time, Freight Train Rabbit Killer felt like a let-down to me. I may have been too wiped to get really into any band at this point, though. They were still good, and hit some gutsy Nick Cave strides.

I tried to catch the end of Tony Tanzi’s birthday show at Gasoline but it had just wrapped. My friend Chris rode with me, I dropped him off and we had a last beer up at his place, which I’d never seen, but is outstanding. He’s moving in a month, so if anyone’s looking for a really unique one-bedroom with a high-arched, temple-like main room, close to Broadway, holler and I’ll pass on the details.

It was quite the stretch, and I figured I’d type it out before any memories fade; I fear I’ve forgotten more good times than some people may ever have.

I work on a lot of stuff, but it felt especially great to feed that music wolf three days in a row. Another cool moment from Saturday was my good friend Paul telling me about the band he’d seen at Lyric Room the night before, a group he’d known nothing about, that just came on stage and owned. He was describing the phenomenon when a mystery band unexpectedly blows your mind, and said, “I live for this sh*t.” A confession, not a boast. I really liked that.

Paul, and people like him who are totally driven to see live music, are the ones who make it all work, more than any other part of the process (including bands, promoters, or venues). It was just a perfect comment to catch as the run wound down.

Thank you all for reading, and supporting local music!